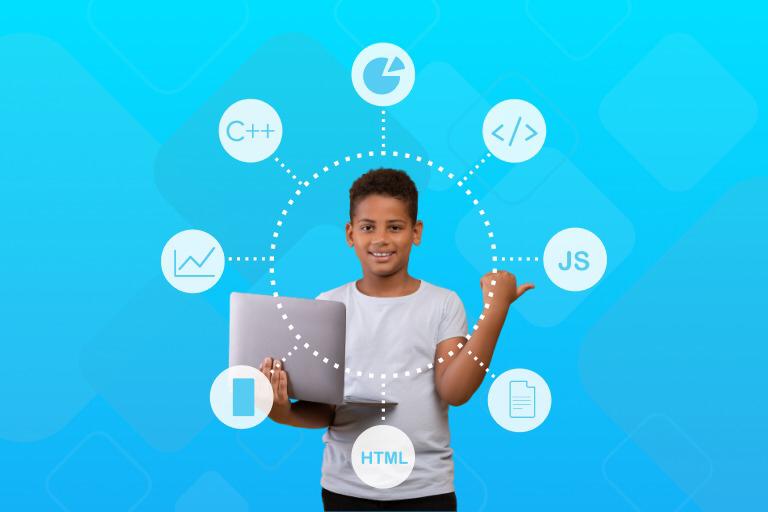 Programming is a great skill for kids to learn and develop problem-solving skills. Starting early with programming will make sure that the children are already ahead of their peers in the future who missed the advantage of learning to code at an early age.

The basics of programming languages are something that anyone who will one day work with computers should have a handle on.

There are numerous programming languages for kids to choose from. However, we have listed some of the best applications that teach kids coding effectively and in an interactive way.

Here is an overview of the top 10 programming languages for kids to start with for kids who are interested in learning to code.

Python is one of the programming languages that read like everyday speech. It’s the most versatile programming language to create numeric and scientific computing projects. Many standard functionalities that programmers need are already built-in, making this an excellent language for kids to learn.

With Python, students will have very few issues with learning how to program or code. Instead, they will be able to learn how to construct programming ideas within their heads and then focus on transferring the ideas into instructions that the machine can interpret.

It’s a block-based programming language that works on a visual interface. The best part about Scratch is that it has video tutorials that help kids learn to program.

Java is one of the most popular programming languages for kids. It is widely used for developing applications on Android platforms. In addition, Java is easy to learn, whether kids are brand new at coding or interested in learning an additional language.

Applications built with Java are more robust as they are measurable and scalable. However, Java takes longer to master compared to other programming languages.

For kids who love Minecraft, Java is likely the best language to start with, as Java is the language of Minecraft. In addition, its English-like syntax makes Java easy to understand and quick to learn.

Ruby is one of the most readable syntaxes for programmers. Instead of spending a lot of time explaining the code that students are typing into machines, a lot of it will be self-explanatory for them.

Ruby is a dynamic, open-source programming language focused on simplicity and productivity. It’s super easy to learn and makes coding as uncomplicated as possible.

Ruby is most used for building web applications. It is one of the best programming languages that can help children to learn the concepts in order to write good scripts.

Many computer science experts and developers have perspectives about kids learning C++ or not. This is one of the programming languages that can look a bit like math and might put students off the idea of learning to code. But once the student understands the basics, it becomes one of the easiest languages for them.

Swift is a convenient language to write software, whether it’s for phones, desktops, servers, or anything else that runs code. It’s a safe, fast, and interactive programming language.

Learning Swift has been a great introduction to modern programming concepts and best practices for students.

Swift programming skills can be applied to a broader range of platforms, from mobile devices to the desktop to the cloud. The best part about Swift is that it works on a simple drag-and-drop functionality, which is super convenient for development.

JavaScript is one of the top programming languages for kids that is used widely. It is simple to start learning and does not require any heavy setup. It is called the internet language, as all the games and interactive websites are created using JavaScript.

Kids can learn JavaScript easily as it has very intuitive syntax and is very flexible when running the scripts on any platform.

Lua stands out from the crowd, but it is still relatively unknown. This language has been used for well over two decades.

Lua has mainly been used in video games and game engines, but it’s also used as a programming language in many network and system programs.

However, it’s rarely used as a standalone programming language. Instead, developers use it as an embedded scripting language for individual programs.

CSS defines the styles for all the elements present on the web pages created using HTML. Kids can learn HTML very quickly as it is simple to learn and understand.

Blockly is developed by the Google developer community. It is designed to provide its users to create and indulge in programming through block-based visual programming.

Kids can quickly understand and learn the design of a program with this. Blockly is used with other languages like JavaScript, Lua, and Python to generate the code in the respective languages through visual block linking.

Coding for kids can help kids become innovators, problem solvers, and future creative thinkers. Codingal motivates kids to bring their imagination to life by engaging in coding course activities individually and in groups.

Try a free class and get started on the perfect pathway for kids to explore and learn coding with Scratch.

Let kids explore their interests and grow; as a result, becoming better prepared for the future and all it holds!

Tips from my experience being a Coding Instructor at CodeImpact.

Success for Codeimpact as I see it

Are you pursuing a UI/UX Design Career?